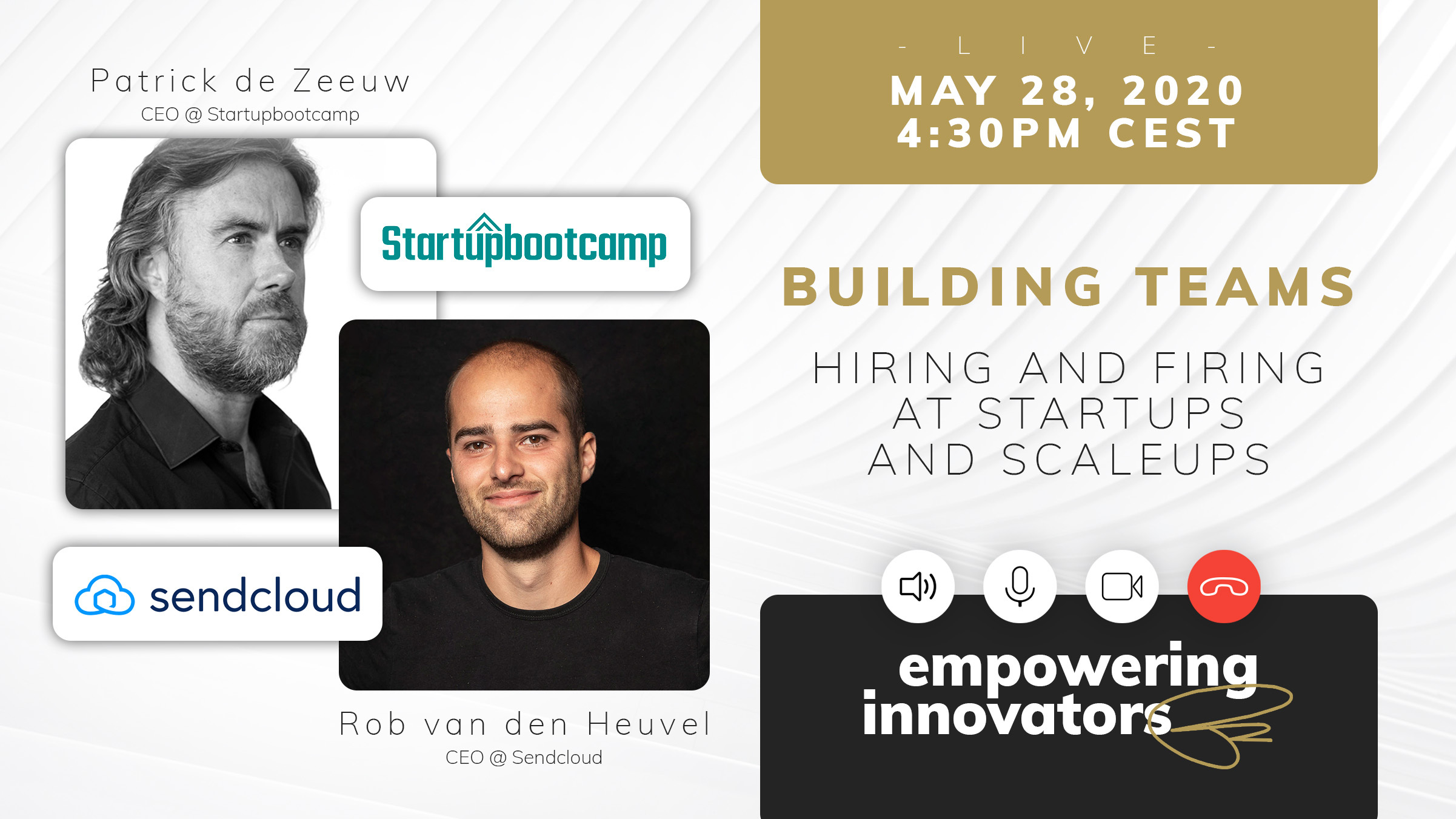 Startupbootcamp alumnus and Europe’s number 1 shipping platform for e-commerce Sendcloud is scaling faster than ever – hiring about 15-20 employees per month.

To understand how they keep on building teams during the crisis and what their insights are on hiring and firing at startups and scaleups, Startupbootcamp’s co-founder Patrick de Zeeuw had a conversation with Sendcloud’s CEO Rob van den Heuvel.

During this Empowering Innovators Fireside Chat – live-streamed on May 28 -, the hiring process, mistakes, and improvements were discussed. To summarize, here are some of our highlights.

4 main takeaways from this Fireside Chat:

1. The way you learn about hiring is by mis-hiring

2. You need a strict hiring and fixed onboarding process

1) The way you learn about hiring is by mishiring

If all of your hirings were to succeed: that would be a bad thing. Mishiring allows you to get more experience, learn, and grow ‘the startup way’. For example, Sendcloud hired a country manager – as they thought they needed it. Eventually, it didn’t work out – not only because of a misfit but also because the product wasn’t ready. The result after hiring two more: there is no real need for a country manager (it is a non-existent role), as sales, customer success, and marketing are managed by the ‘Heads’ in the local office.

Now, Sendcloud has centralized all of its markets (except for Germany). They have a localized management team to avoid the organization becoming layered. Therefore: they recruit natives and grow to incubate markets from their headquarters.

2) You need a strict hiring and fixed onboarding process

Hiring
Your most valuable asset is your team, and the front door is the hiring process. Sendcloud’s in-house recruiters are actively sourcing (a tip is to never outsource) and guiding the inbound as well – handling around 50-60 job openings per day. To stimulate them to actively outreach, Sendcloud works with an incentive system (bonus) and an option scheme. Sendcloud hires both EU as non-EU candidates, arranging everything – from the knowledge migrant application forms to housing. Right now, they have about 32 different nationalities working for them.

Their recruiters are strict on Sendcloud’s culture and core values. In line with this, their first call is to find out if there is a cultural match, after which the hiring managers test the candidates, At last, the candidates go through one day full of testing and interviews at the office – like one big pressure cooker (which can be compared with Startupbootcamp’s Final Selection Days). At first, they did not do this full testing day, which was a mistake.

To see how the participants respond and if they fit the culture, Sendcloud’s team tends to ask ‘the not so very typical’ questions. To dive deeper into the experience of – for example – sales agents, Sendcloud gives them a practical assignment to know if they can sell. The assignment differs based on the candidate’s experience.

Sendcloud has an outlined profile of what they are looking for in their new employees: it shouldn’t be the ‘average Joe/Jane’, but someone who is the ‘good kind of crazy person’ (i.e. has a strong and own personality).

Onboarding
At Sendcloud, onboarding starts 90 days before the job starts. At first, new employees receive as much information as possible and get various calls about what to expect. On the first day, they get a warm welcome, and everything is pre-installed and up and running, after which they attend a product training and a strategy and vision presentation. Sendcloud tries to group the starters as much as possible, as ‘it is never nice to start alone.’ 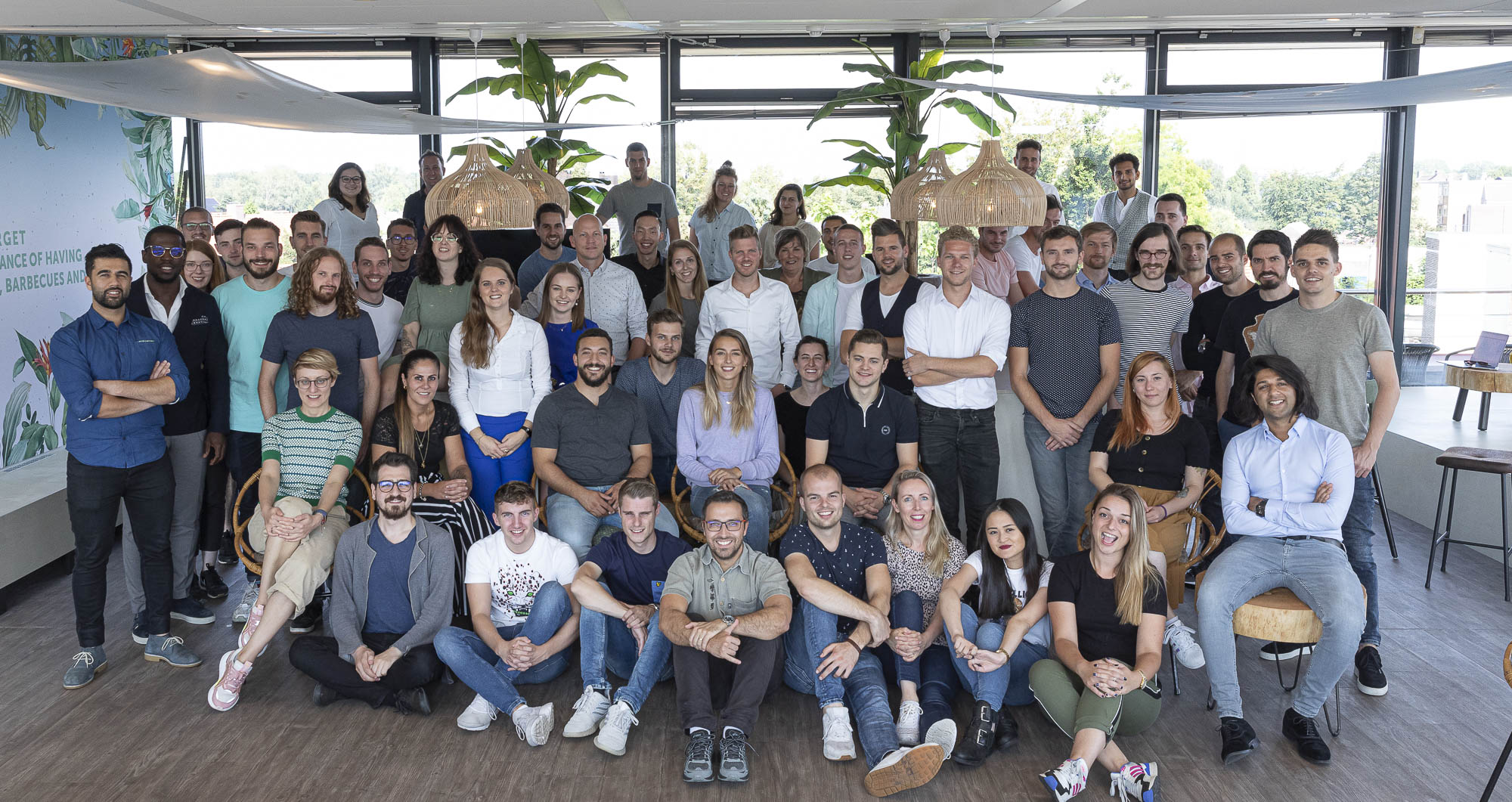 To scale up, tools for recruitment and onboarding are necessary. Sendcloud uses Greenhouse (made in the US), which is an integrated ATS (Applicant Tracking System), allowing Sendcloud to place vacancies on 15 different boards. Besides, they also use LinkedIn Recruiter.

During the interviews at the office, the interviewers fill in scorecards, which are part of the toolkit in Greenhouse.

When Sendcloud joined the Startupbootcamp program in 2014, all founders had to take the Facet5 test – a personality and profiles test (widely used by the SBC team), which tests Will, Energy, Affection, Control, and Emotion. As their culture and values are essential, Sendcloud is implementing this to test the soft skills of all their key candidates. Right now, this is done by the use of scorecards. Though, as Rob says, ‘it stays difficult to put a number on it, as – for many people – it is mostly a gut feeling thing.’ At Sendcloud, hiring is a real company effort. As a result of this, they allow their employees to broaden their network and brain capacity.

One of Sendcloud’s core values and components is their ‘No bullshit’ policy – i.e. the importance of being open and transparent. It does stay difficult, though, to avoid it becoming subjective. Leadership should, therefore, set an example.

To keep the founders aligned on business goals and the right work/life balance, Sendcloud does pre-mediation – which they already did when following the Startupbootcamp program back in 2014. Pre-mediation is ‘mediation before it is necessary’: Rob, Sabi, and Bas (founders of the company) tell each other what bothers them during an informal dinner. With the other staff, they discuss certain topics during their Sendcloud team getaway, which they do twice a year.

Sendcloud’s goal for 2025 is to file for an IPO in 2025, which is a goal by itself: to start something from scratch and build a strong, independent company. We are very proud of Sendcloud and wish them best of luck at achieving this!

Our next Fireside Chat is coming up soon!

On the 2nd of July, MobieTrain’s CEO Guy van Neck will have a conversation with Patrick de Zeeuw about best practices of early-stage Investments. Make sure not to miss it!

Born in Germany, raised in France, she eventually settled in Amsterdam. Romée van Lotringen is internationally oriented, highly focused and hands-on - that’s why she does not hesitate to go a step further to achieve her goals. Her background includes roles with Total Design, Marie-Stella-Maris and bloomon in the fields of communication, content creation, social media, innovation and client management. Romée obtained her Bachelor of Arts degree, specializing in Design, at Vrije Universiteit in Amsterdam.