Paving the way forward into New Frontiers – The FinTech & CyberSecurity Class of 2019
February 18, 2019

We rode the Waves of Innovation and navigated the Winds of Change. Now we’re standing at the edge of New Frontiers – and, we’re paving the way forward!

3 years in the making

This third cycle of the Startupbootcamp FinTech & CyberSecurity program was one for the books. We kicked off Final Selection Days together with the second largest pension fund in the Netherlands, PGGM (and what a great collab that was!). We included a corporate-startup-venture into our cohort (Lifas, a team from PGGM). One of the cybersecurity startups (Fortify Data) in the program entered Capgemini’s scale-up program. Comsec, one of our CyberSecurity partners, did tests on a number of teams to make sure their solutions were secure (and in doing that found a potential partner, in one of our startups as well!). And of course, our 2019 batch of FinTech & CyberSecurity startups and scale-ups, had the opportunity to connect and engage with over 15 partners (including major banks and insurance companies in the Netherlands, and abroad) during the course of their 3 months of acceleration. 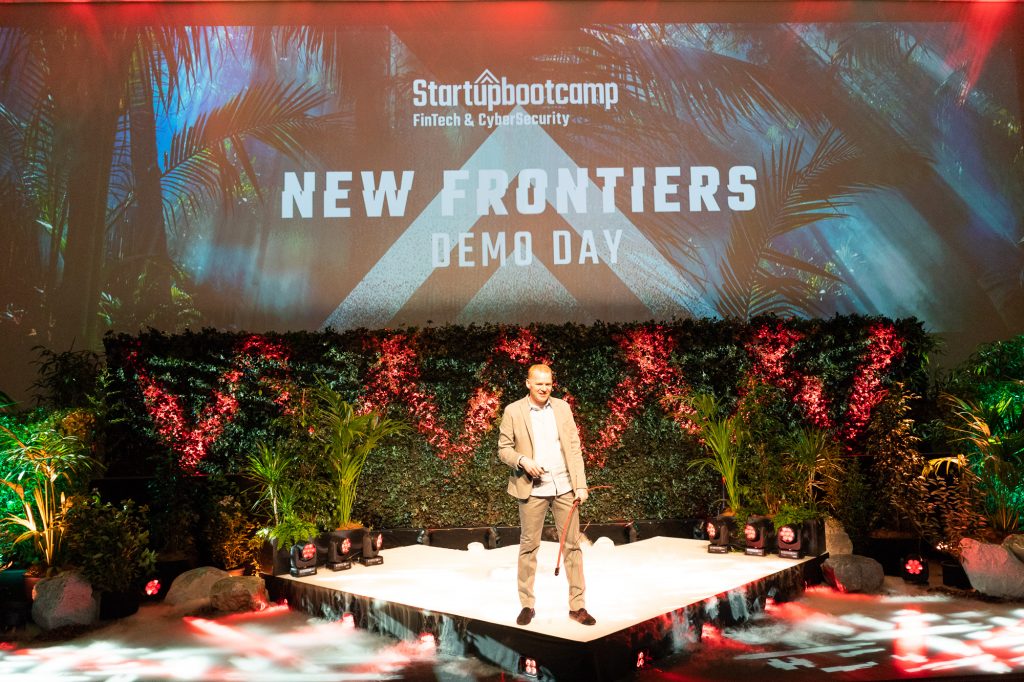 In these past years, Startupbootcamp has built the world’s leading innovation programs in FinTech, InsurTech and Cybersecurity. Not only are we the world’s #2 investor in FinTech – in 2018 Startupbootcamp was also one of the most active seed-stage (a crucial stage for helping startups get off the ground) investors in startups. This was the third cycle of the FinTech & CyberSecurity Program in Amsterdam – and the good news is, we’ll be extending the program in Amsterdam for another 3 years! As Michael Dooijes (Managing Director, FinTech & CyberSecurity 2016 – 2019) will be taking the lead in building up a new, robust FinTech program in Frankfurt, Joost Bergen will step in as the new MD for the upcoming FinTech & CyberSecurity programs in Amsterdam.

Demo Day: “Only the toughest can survive the Startup Jungle”

If you’ve been to the SBC Amsterdam Demo Days, you know our events are always inspired by special themes. For this Demo Day, our muse was the mighty jungle.

Running a startup is like entering a startup jungle: an unpredictable and uncertain ecosystem that holds inside of it, an oasis of opportunities.

10 startups, 1 scale-up-in-residence and 1 corporate venture started their acceleration journey back in November. On 14th February, they graced the big stage (at Rabobank HQ in Utrecht) and pitched their solutions to an auditorium of over 400 partners, mentors, investors, and other invited guests and with more than 2k viewers online via the Facebook livestream.

We kicked things off with a keynote on the changing role of data, by Finbar Hage, Head of Data and Analytics (EVP): It no longer just serves as a means of finding a solution to a problem, data today has the potential to launch new ventures, and help us create new paths. Finbar highlighted that one of the key challenges of today is using data in such a way that it drives innovation AND fits the abilities and capabilities of people. He left us with a timely reminder:

Today, Artificial Intelligence might not be able to accomplish everything – but maybe tomorrow it could. It is up to us, to find a way to make data work for us.

“It’s really difficult to explain all the roles and all the things that an MD does – but what I can tell you is that, in doing this, I got 10 years of my life back. That’s been the most exciting part. I have seen the future of FinTech of InsurTech developing before my very own eyes. I’ve been amazed at how much I’ve learnt myself. It’s been a great ride.” – Michael Dooijes, Co-founder and Managing Director, Startupbootcamp FinTech & CyberSecurity Program

Back in 2016, the program was more focused on early-stage companies. But as the industry evolved, the program evolved with it and started including more advanced teams, as well as scale-ups. This matched the needs of the many corporate partners in the program who went from looking for ‘market intelligence’ in the earlier years to real, actionable, innovation.

Additionally, this cycle’s partner portfolio saw several new additions including the largest private bank in the Netherlands, Van Lanschot Kempen, the leading Surinamese bank Hakrinbank and the third largest bank from Italy, Banca Sella. In his speech, Michael emphasized how new frontiers in our industries can only be reached when corporates and startups collaborate.

True enough, through the program, the startups found many opportunities for various types of collaborations (sprints, pilots, and more). Some breakthrough announcements between major corporates and the FinTech & CyberSecurity Class of 2019 were announced in the pitches that followed! The first half kicked off with the following startups:

Q: Why is innovation not working?

After a brief intermission, Demo Day resumed in full force: Patrick de Zeeuw, co-founder of Startupbootcamp interviewed, Chief New Technology Officer, and VP FinTech Europe at Capgemini, Elias Ghanem, about the ‘corporate perspective’ when collaborating with startups. Why is innovation not working? Elias highlighted some key factors that corporates need for effective collaborations with startups: the right team, right finances, business traction and of course, technology (and the ability to scale the technology).

“Think like a corporate if you’re start-upper, think like a startup if you’re a corporate. Collaborate effectively. Stop open innovation noise and start making things happen. 2019 is the year where FinTech matures. It’s not about hanging around, it’s about making collaboration effective.” – Elias Ghanem, Chief New Technology Officer, and VP FinTech Europe at Capgemini.

(Elias was one of the guests, in ‘Empowering Innovators’ a new interview series hosted by Patrick  – catch up on all the episodes, here!).

One year ago, Capgemini created its ‘Scale-up qualification program’, together with Startupbootcamp. On Demo Day, Elias was proud to present one of the teams in the 2019 FinTech & Cybersecurity cohort with their qualification! Rated as an ‘emerging’ scale-up, Fortify Data was announced as the next scale-up to join Capgemini’s new program.

“When we started the program we didn’t think we’d gain this much traction. But I think It’s because we’ve primarily focused on understanding what the client’s needs are, and adjusting our business model to meet their specific requirements. The most valuable part of this program for us has been the ecosystem – we’ve been able to get guidance from mentors, large corporates and also feedback from IIRs/EIRs who’ve helped us communicate with the large corporates to make sure that we’re able to position ourselves to truly validate our business model.” – Victor Gamra, CEO, Fortify Data

Following this announcement, Victor Gamra from Fortify Data kicked off the second half of the remaining pitches!

After the pitching concluded, networking ensued where guests got the chance to speak with all the teams, get connected and discuss potential next steps. Startupbootcamp looks forward to supporting all of them in their journeys post-program (where they’ll be joining our alumni family).

If you’d like to get in touch with one of the teams, drop us a note.

For more details on all startups and demo day, read the official press release here