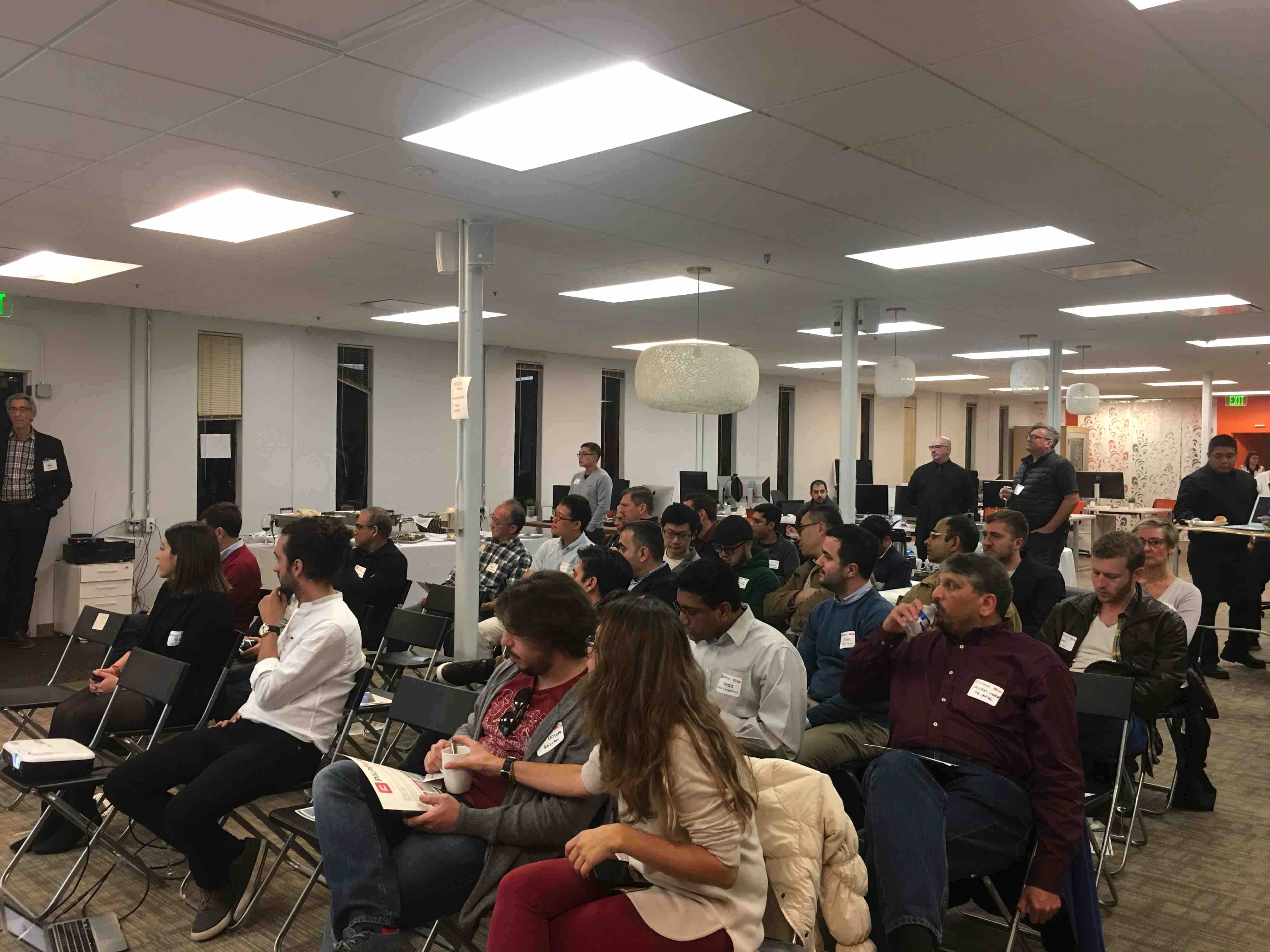 A closure is a tricky concept that is usually hard to attain. However, having left two extremely successful demo days behind, (the first event on the 6th of December, organized in collaboration with Inventus Law Firm and Silicon Valley Bank (SVB), and the second event on the 10th of December in partnership with PitchForce by PeopleConnect), it is hard to imagine a better possible ending to 3SLP Startupbootcamp SF.

It was a privilege to attend the first demo day panel alongside Vera Shokina (MD of Silicon Valley Bank), Sayan Gomel (Head of Corporate Development at SVB), Anil Advani (Managing Partner at Inventus Law), Sandeep Sardana (MD at BluePointe Ventures), Ege Ertem (CEO at Zorlu Ventures), Elie Habib (Partner at Middle East Venture Partners) and Salil Pradhan (Venture Partner at Draper Nexus Ventures). Over 50 people attended the first event featuring a networking session kick-off alongside food and drinks. The second part of the event was a VC panel lead by Anil Advani, introducing investors, their companies and what they seek for their future investments. The investors answered questions regarding investor look-out as a startup, adapting to Silicon Valley, requirements for success, and so forth. The third section of the event was entrepreneur presentations followed by constructive feedback from the investors. We concluded the event with a final networking session where the attendees got the chance to debrief with the panellists and the entrepreneurs.

Our second round of incredibly well-rounded list of panelists included Tony Lazar (Chief Operating Officer at DocuStream), Yoram Arbel (Angel investor, member of Silicom Ventures, Keiretsu Forum), Axel Tillmann (Senior C-Suite Management Consultant at Alpha-Consult), Katherine Glassey (Angel Investor at Band of Angels and Coach of “Radical Candor”), K.S.Osone (Investor and Mentor in Bay Angels), and Max Shapiro (Founder and CEO of PeopleConnect). This second demo event was lead by Max Shapiro and followed a competition like structure, in which the teams competed in front of the panellists with their pitches. They had previously presented their products and services during the networking session and were given 4 minutes to pitch them in the competition phase. This was followed by feedback, questions and voting. The winner was Smart Mimic with a score of 21 out of 25, followed by Wisboo, and Optiyol. It was a true pleasure to be a part of such an invigorating atmosphere.

Aside from hearing the pitches from the teams, the program of both demo events incorporated multiple opportunities of networking and community engagement in the Valley sphere. Fully settled, funded and at the verge of their growth trajectories, these chances were invaluable for the teams. The attendees of these events were truly astonished to find out more about the program, the startups, the ideas and the teams behind the process of making these ideas a reality in the context of 3SLP.

Since its first day, 3SLP has been working hand in hand with the teams in creating a nourishing, growing, enlightening and mentoring platform from which they could gain accelerated and scaled growth in Silicon Valley. The boundaries of the office, although physically constrained, bared no limits in terms of imagination, collaboration and flow of ideas. The program connected the teams to a myriad networking and partnership opportunities such as VC talks, Founder Talks, Mentoring Sessions and Field Visits. The most primary field visits included Google, Silicon Valley Bank, ServiceRocket, HubSpot, and Amazon. Our guests for the mentorship sessions primarily involved our main mentors Chris Yeh, the co-author of the recently published best seller “Blitzscaling” and Jeff Abbott. The mentorship pathway they constructed were, further supported by mentors such as Kashi Tahir, Stephane Panier and Barış Karadoğan, as well as the constant support of the list of mentors mentioned on our website. We truly appreciated the flood of support and mentorship we received from individuals, organizations, and companies such as BNP Paribas, Fidelity, Charles Schwab, and David Kirby from PEAK Technology Partners. These mentorship sessions were further reinforced with legal guidance, adjustment tips from experts in immigration and visa policies, banking workshops, marketing strategy presentations and so forth. The connection we had with our teams were more than professional partnerships; it was one fused by intense collaboration and extended discussion on prospering as a startup, through events such as deep dives and our traditional Friday “Weekly Brain Trust Sessions”. All these have made the program what it is today and helped create its long-lasting impact for the future generations.

All these, efforts were not fruitless, given the overwhelming and uninterrupted interest, our startups continue to experience. Not only has one of our startups (SmartMimic) been on a TV segment featuring growing businesses, but they also brought home the first prize from the pitch event, PitchForce. While gaining investment, there were times when one of our teams would come back from a pitch event with a new hire, an investment promise, or even a new set of Linkedin followers.

The program really did create a ripple that has the potential to extend to geographies far greater than imaginable. It can only be fulfilling from now on to follow the trajectory our startups’ paths will lead them to. You can find the list and websites of our cohort on here to keep up with their latest developments!