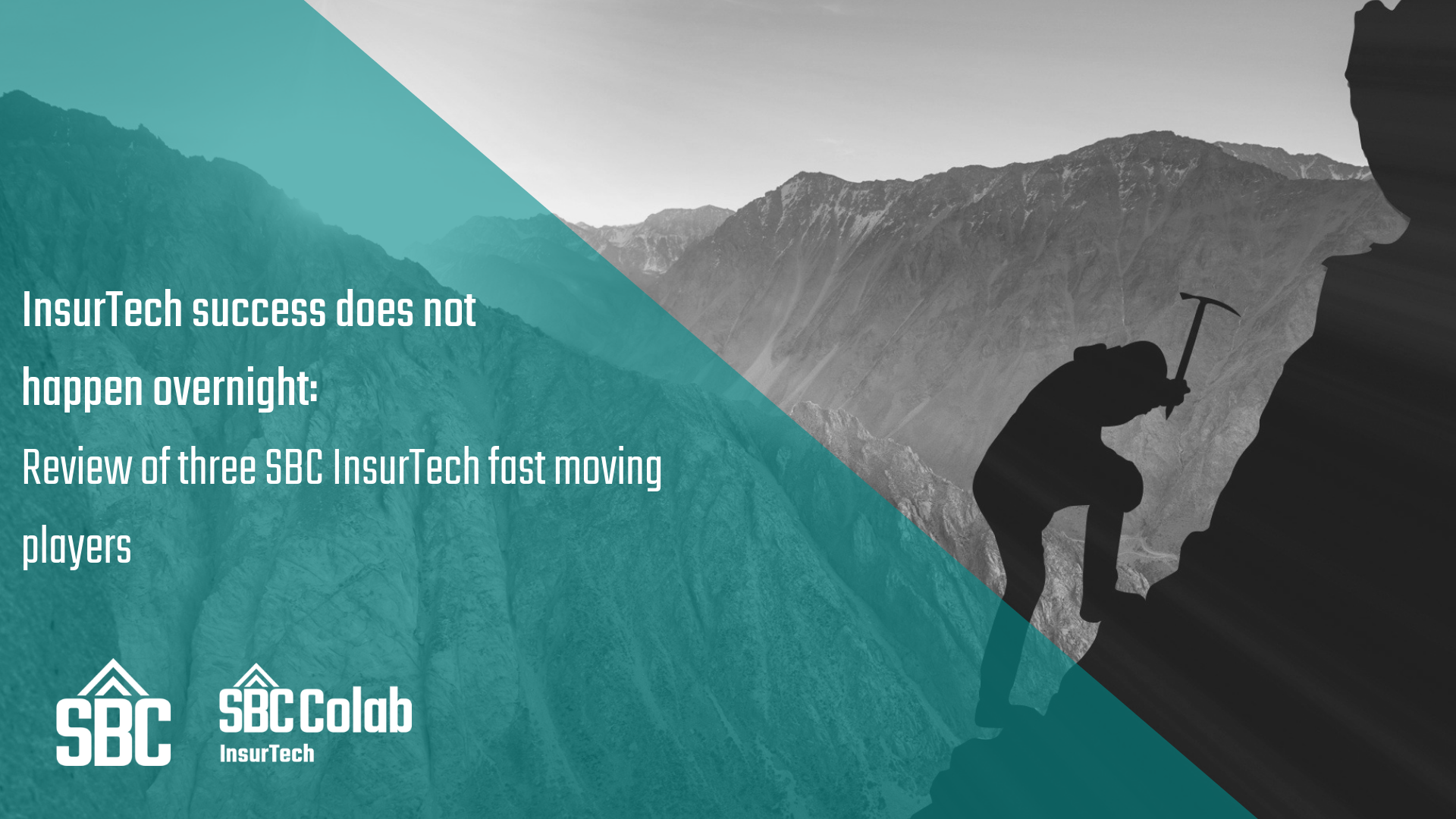 There’s a great deal of talk in the insurance industry. It focuses on change and the pace of it. Digitalisation and technological advances are at the heart of that change and the driving forces behind it. Startupbootcamp (SBC) InsurTech isn’t just about talking. It’s about enabling the instruments of change – startups – to become the drivers of the new world of insurance.

Many of you read about Relayr’s recent $300m acquisition by Munich Re. Industrial IOT player, Relayr attended our Amsterdam contactless program in 2013, and while not a true InsurTech per say, we can through this acquisition see how the boundaries between insurance and the other key sectors impacted by insurance products and services are gradually becoming blurred.

So what has happened since 2015 from a marketing front?

SBC has been mentioned in the media over 350 times since its inception three years ago. On social media we’ve been mentioned over 7 million times! There’s a real buzz about what we’re doing and with good reason.

Let’s take a look at some numbers associated with SBC InsurTech that show the real impact delivered over the last three years:

The startups which are part of this are successful for various reasons. Naturally, there are always one or two companies that exceed expectations and grow their businesses much quicker than others. We look at some of the companies that have achieved great things in the short timeframe since they left the SBC InsurTech program. It’s an exciting time for us, for the industry, and for industry leaders of the future.

Let’s start with the most recent success story that comes directly from our 2018 London cohort… Zeguro.

Zeguro is a pioneer in cyber risk management for small and medium-sized enterprises with revenues under $100 million, like law firms, retailers and medical practices. These businesses maintain a lot of sensitive data and as such, are a popular target for hackers and cyber-crimes like phishing, ransomware and crypto-mining. Many of these businesses fail as a result of the cost of remediation.

A timely solution to a very real-world problem, we knew big things were on the horizon for Zeguro. Even before they had completed the accelerator program, they announced a partnership with Hartford Steam Boiler (HSB), part of Munich Re one of the world’s largest reinsurers, to provide capacity to support Zeguro’s cyber insurance offering.

A mere few months later and after having taken full advantage of the opportunities afforded to them during the program and after Demo Day, Zeguro closed $5 million in funding from a prominent group of investors, including one of our portfolio investors, to launch its Cyber Safety Platform to help companies assess and mitigate their cyber risks.

“Working with SBC, we were able to learn quickly from experts about the many aspects of launching a new business. From strategy, to marketing to business development, our time spent in London was a fast-track to refining our plan, accelerating our story and how to pitch it, meet some incredible business partners, and ultimately close a significant round of funding to complete our product and begin our growth story.” 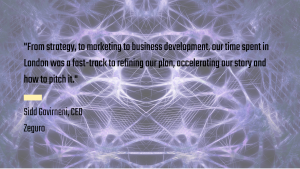 We look forward to continuing to support the Zeguro team as they expand their business across new markets.

Prior to commencing the second year of the program, we were introduced to a French startup, known then as CBien, but now better known as Valoo.

Valoo joined the 2017 cohort of the InsurTech London program as a Startup or Scaleup in Residence. A digital asset management platform geared for the need of sharing economy participants, Valoo allows users to make a complete inventory of their furniture, electronic equipment, books and many other items. Valoo allows users to value items that are bought and uploaded on the digital platform and offers traditional and on-Demand coverage and/or helps users to manage claims. Each user can keep track of their belongings in the event of theft, loss or in case of significant losses. It also allows the users to rent, share and estimate the value of their assets for resale.

At the time of joining the program, Valoo had already made significant progress: they’d closed a first round of funding in 2015 and the platform was already live with some partners in France. We knew then that they had a strong desire to expand internationally.

By the end of the program, Valoo had raised an additional $10 million (€8m) in funding, bringing the total capital raised to $11.4 million.

Valoo has made great progress working with insurers and other financial institutions across Europe. A worthy announcement earlier this year was a collaboration agreement with insurer Baloise in Switzerland.

“It is not so easy to understand the differences between markets and above all to meet the right contacts, when you are not based in a country [in which you want to operate]. The SBC team challenged us to be more scalable than we were, and the program gave us the opportunity to accelerate internationally by meeting people from across the ecosystem: sponsors, partners, investors. Thus, we announced our second round of funding from French insurers at the end of the program and we were ready to launch in new countries such as Luxembourg and Switzerland.” 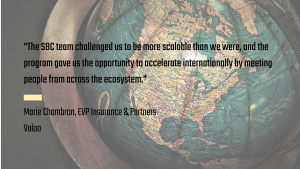 And it doesn’t stop there. Valoo promises that more news and countries will be coming soon.

Founded in 2014, buzzmove is a price comparison and booking platform for the moving industry and joined the SBC InsurTech program in London in our first year, 2016. The focus of buzzmove is towards the removal agency and its aim is to support home and business owners to move their assets from property to property. Through buzzsurvey the company provides moving companies with professional surveying capabilities to capture digitally and in real time all assets being moved for property owners and renters.

Through the launch of their newest brand buzzvault, the company now allows consumers not only to compare and book certified movers but also create a digital and accurate inventory of their belongings and remit the digital asset footprint directly to the owner.

In 2016, just after completing the program, buzzmove announced an $8 million (£6m) super-seed funding round led by White Mountains Insurance Group Ltd. The company went on to achieve greater things, from winning multiple awards and recognition for their inclusion and diversity policies.

“I have always been driven by the idea of building a legacy and a business that solves real relatable problems. I had a terrible home insurance claims experience following a traumatic burglary. This, together with hitting the big 3-0 (and thinking now or never!) is what triggered me to abandon my career in law and start a business that seeks to build an insurance company that actually has the customers’ backs in the way that it should.

“So… I started buzzmove. I had £60k in the bank and a good idea. Three years later, in August 2016, following my graduation from SBC InsurTech, I turned that £60k into £6 million.” 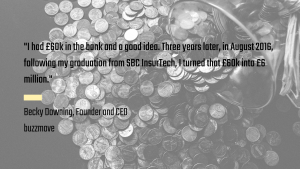 Watch for more on buzzmove’s journey to $8 million Super-Seed Round.

Just a few days ago buzzvault launched their newest proposition with Munich Re Digital Partners. buzzvault has been designed to empower householders through the creation of their own secure vault of digitised home contents data. As the world recognises our continuous need for hyper-personalisation, insurance products will also be signed in such a way. buzzvault is the first hyper-tailored home insurance policy based on the customer’s home contents data, covering both buildings and contents.

We foresee huge potential for solutions within the insurance sector that are challenging how we engage with our customers. New firms are attracting significant amounts of funding now flowing into InsurTech businesses and there is no sign of this InsurTech momentum slowing down.

To have witnessed and been part of the success that buzzmove, Valoo and Zeguro (and many others we have not mentioned just yet) have achieved so far in their journeys is truly humbling and we are excited about the prospect of working with even more incredible startups, scaleups and fast growth ventures set to change the insurance industry in the future.

There’s a lot that we can learn about the key elements for success from these inspirational companies. They all share things in common, including resilience, grit and persistence and teamwork. The founders knew that they couldn’t achieve the success they have without the team they have built around them. Take inspiration from them!

Sabine is the CEO for the InsurTech Business at Startupbootcamp and Rainmaking, the home of Startupbootcamp InsurTech and Hartford InsurTech Hub. Sabine cultivates the expertise of leading insurers, investors and mentors to bring the innovation of cohorts of startups to market. She brings extensive operational and growth strategy expertise gleaned from her corporate innovation and startup acceleration activities working with global firms and 100s of well-known financial services institutions for which she developed growth strategies. Outside Startupbootcamp, Sabine advises and coaches a variety of businesses. Sabine is also a co-editor of the first crowdsourced InsurTECH Book, published by Wiley in 2018.