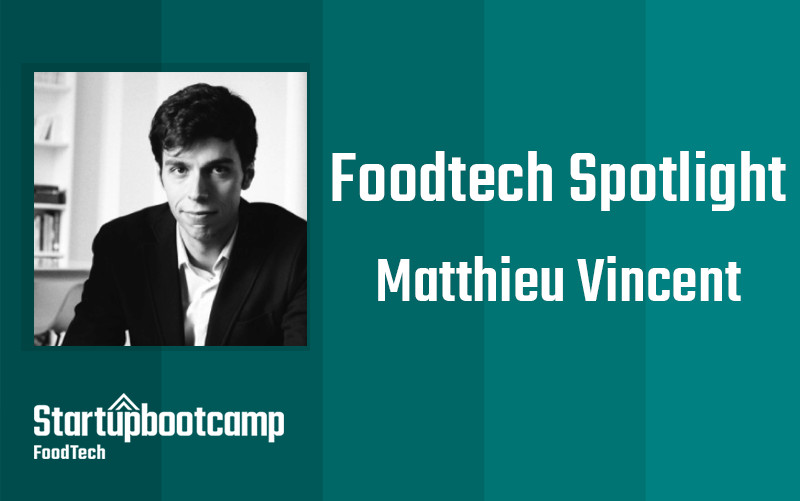 Our Demo Day at Station F is supported by the top leaders in the global foodtech ecosystem. We know that co-creating is the strongest method of innovating. For that, this year, we’ve partnered with companies with a strong positive impact on the future of foodtech including DigitalFoodLab, the FoodTech’s intelligence platform.

To better understand DigitalFoodLab and the insights they have regarding foodtech ecosystem, we met Matthieu Vincent, co-founder of DigitalFoodLab for our spotlight!

Matthieu is the co-founder of DigitalFoodLab and FoodTech entrepreneur since 2010 when he founded WeCook, a platform dedicated to nutrition, combining media, premium services, meal management tool and a database of more than 10,000 recipes. When it was sold in 2016, WeCook reached 500k visits per month and thousands of premium customers.

Matthieu is M.Eng from Telecom SudParis and MSc. in e-commerce from Dublin City university.

Q: So Matthieu, could you tell us about DigitalFoodLab? What do you guys do?

DigitalFoodLab is the FoodTech intelligence platform. We gather data on FoodTech startups and investments at a global level. This data and our insights help our clients, corporates, investors, and entrepreneurs, to detect and act on opportunities. We work on startups mapping and analysis, foodtech watch and reports.

Q: How do you think that the European foodtech ecosystem has changed in the last years?

With 4.2 billion euros invested in 999 deals between 2014 and 2018, European foodtech is growing fast. We observe a steady increase in startups creation, from about one hundred startups created in 2013 in Europe to almost one created per day in 2018. This growth is also obvious in investments, both in the number of deals and amounts raised. Over the last four years, there were 434 deals above € 500K and 33 above 20 million.

Q: How do you think its role in the international foodtech ecosystem will evolve?

Investments in European startups represent on average 16% of the global amount invested in foodtech over the last four years. However, European agri-food industry accounts for a fourth of the global market share. To maintain Europe’s weight in this industry, substantial investments in the European foodtech ecosystem need to be made.

However, we observe that many successful European startups are copycats of US startups launched two or three years before (Huel, Feed, supermercato24, etc.). This is less and less true but it still represents a lot of opportunities for new entrepreneurs. Right now, most of the best startups lack the right amount of money to become truly global (with some exceptions like HelloFresh). It is partly due to the lack of corporate venture funds looking into FoodTech investments in Europe (comparatively to the US).

With the exists and success of the first European startups, more successful entrepreneurs and more corporates funds will be able to sustain the growth of a more mature ecosystem and therefore make European foodtech startups more ambitious on the global stage.

Q: Could you give us some highlights from the last report published by DigitalFoodLab?

German “startups” Delivery Hero and Hello Fresh along with the English startup Deliveroo represent 60% of the total amount, €4.2B, invested in European FoodTech startups. It drives up investment inequalities between categories: Delivery & Retail represents 80% of the amount invested for only 37% of all deals. Other categories are far behind: Foodservice is second with 9% of the amount raised (for 20% of deals), then comes AgTech, FoodScience, Media, and Coaching.

Germany: few startups with a lot of money v.s France: a lot of startup with little money

Two countries lead the way: Germany and the UK. They represent 63% of the total amount invested in European FoodTech startups in 2017. We can see two other clusters following: the first one with France and Holland, and a second one emerging with Sweden, Switzerland, and Spain. If we put aside the three delivery unicorns mentioned above, France obtains the largest number of deals, with 176 deals over 500K€. However, these startups have difficulties to grow abroad and to be funded at later stages. On the contrary, Germany is home to a smaller number of startups, but among them, there is a large part of Europe’s giants. The United Kingdom has the most balanced ecosystem with many startups at every stage of the funnel (from project to unicorn). A geographical breakdown by cities highlights that Berlin, London, and Paris are major foodtech hubs, followed by Amsterdam, Barcelona, and Milan.

The full report is available here for free: https://www.digitalfoodlab.com/en/foodtech-in-europe/

Interested in meeting foodtech experts like Matthieu? Get your invitation to our Demo Day, few more seats available!