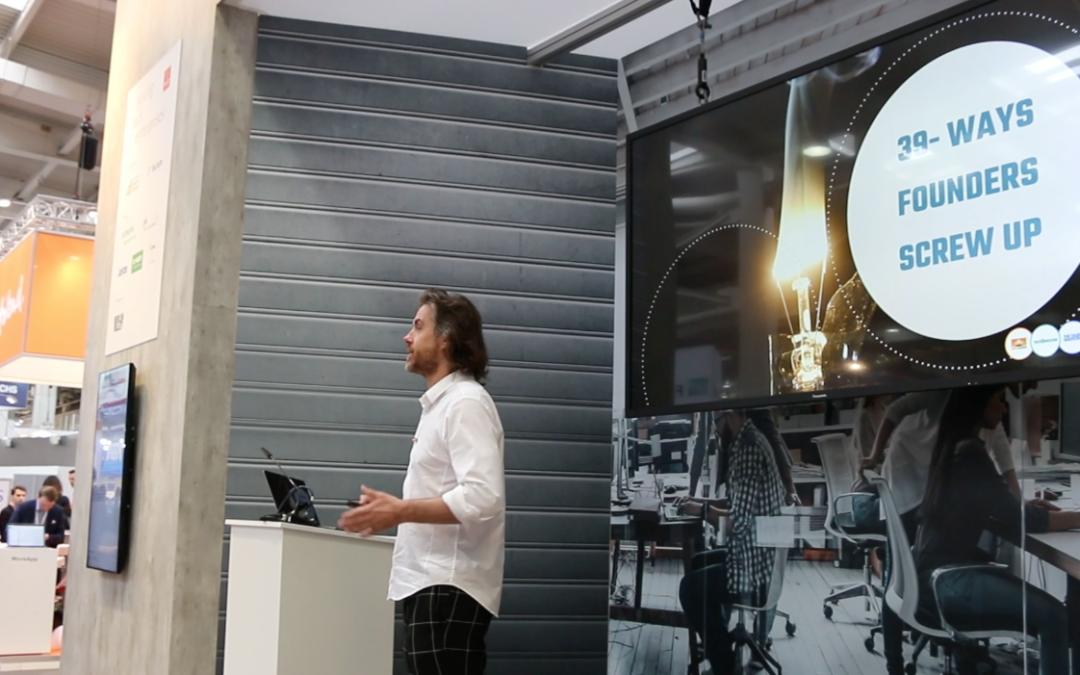 In all his years of being an entrepreneur, working with entrepreneurs and supporting entrepreneurs and intrapreneurs, he has learnt and experienced many do-s and don’t-s of starting and scaling up a company. Just last month, Patrick shared his take on the Top 30 F#ckups of Startup Founders, at the largest tech fair in Europe, Hannover Messe. It’s always much easier to catch yourself doing something that you shouldn’t be doing, rather than trying to remind yourself about something that you should be. So, in this 3 part blog series, we do a quick recap of serial entrepreneur Patrick De Zeeuw’s words of advice, and explore the 30 things NOT to do as a startup founder.

Check out a snippet of his presentation here: 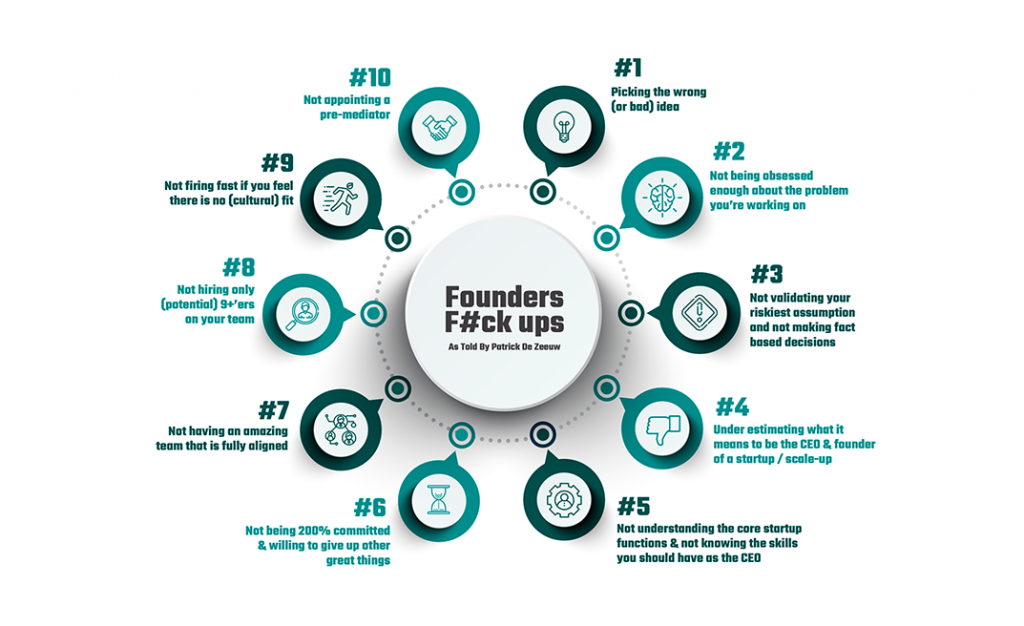 #1 Picking the wrong (or bad) idea

Many founders of startups but also managers of enterprises end up picking the wrong idea. Why? Because, they don’t do any validations, and don’t really know, if there is a problem to be solved or not. People often get excited about new ideas. They fall in love with the idea instead of the problem. They build a new product or service just because they can. Validating all your riskiest assumptions takes time, effort and patience. This is something many founders and managers of companies do not have. It’s a shame, because it’s a waste of time to create something nobody is interested in. Fall in love with the problem of a specific audience and validate your idea. You will be amazed by the insights you would have gathered, that will help you create a product that truly solves a problem that your target audience needs solved.

Think about the following: What was the reason for you to work on that specific idea? Are you motivated from the gut to solve this problem? Why? Doing it just for the money, is a short-term incentive and a big mistake. The truth is, the money will follow, if you follow your passion and truly add value to your customers problem(s). Next to this, if you are not super motivated, the chances of you giving up at the 1st or 2nd “problem” or “storm” you’ll encounter is pretty big. As a founder you need to be relentlessly resourceful, always trying to find creative solutions for the problems you (definitely will) encounter. I’ve learned that, if you fall in love with the problem (see #1) and are obsessed about solving it chances of you succeeding increase dramatically.

“When I fell in love with the problem that Startupbootcamp; then a few years later – Innoleaps and then 3 years ago – The Talent Institute aimed to solve,  I was and still am so passionate about it that I never ever thought about giving up, no matter how difficult things have been in the last 8 years. And trust me…we’ve had some really difficult situations. But the mission was bigger than all those problems together so we pulled through and did not give up when “the shit hit the fan” and we needed to make some drastic decisions.”

Many founders think they know what the problem of their customers is, but often they do not validate them. They think they have a great idea and bring it directly to the market. They spent lots of time, sometimes money and expect all their hard work to pay off when the product is finished. That never works. Why? Because the chances of launching a product without having hard core data regarding who your customer is and what their problems are, is close to “0”. Which leads to “no product-market-fit”, which is about 50% of the reason why startups fail.

The practice of validating your riskiest assumption is focused on learning – once you’ve validated the main assumption, you move on to the next. Your goal is to gather as many insights and data as you can, regarding the problem your (expected) customers experience. You do that by “talking” to customers about their problems. Showing genuine interest in their problems. You can also do this online by running experiments that will give you hard core data about how people respond to the topics you aim to validate.

Keep in mind that, to validate you riskiest assumptions, you don’t have to build more than what’s required to test your largest unknown.

What does the “E” in “CEO” stand for, when it comes to startups? Not Executive. An executive is a manager. A person that manages a team, sets targets, checks if the team is on track etc. At a startup and scaleup the “E” stands for: Chief Entrepreneur Officer. If you’re an executive in a large organisation, you have to run the company. If you’re the entrepreneur, you have tobuild the company – which is something entirely different from ‘simply’ managing it. Many CEOs at startups and scaleups often underestimate what it truly means to be a CEO: the leader of the pack that creates something out of nothing.

As a founder, you’re doing everything. You have to know about leadership, the product, sales, the company culture – everything. You have to be a ‘T-shaped’ person – someone who knows a little bit about many different things. Most “E’s” are not specialists, they are generalists and (think.. :)) they know a little bit about many things. In every company, almost always, its that one person that makes all the difference – it’s the leader of the team, that is eventually able to inspire, bring in new customers, create the culture (or often “is the culture”), attract amazing new team members, solve crisis, bring on board investors and so on. It is a crucial role. Without a Chief Entrepeneur Officer most startups and scaleups fail.

You don’t win a gold medal at the olympics, if you don’t give up many other things in life. If you want to be successful with your startup, there are going to be many things you have to be willing to give up. Running a startup is not a lifestyle business. It has to be your mission in life that you aim to accomplish. All the other things, as great as they are, have to be put a little bit aside (for now). Especially in the first couple of years but probably longer. Don’t think you’ll have overnight success. To build a company from scratch, takes on average, about 10 years. Think about that!

#7 Not having an amazing team that is fully aligned

Many startups struggle with getting an amazing team that is fully aligned. Steve Jobs has said “Great things in business are never done by one person. They’re done by a team of people”. Building and growing a solid team, is the most important part of any business – in the path towards growth, and on the path to success. It’s the CEO’s role to create that amazing team and bring amazing co -founders on board.

#8 Not hiring only (potential) 9+’ers on your team

This is one of the most difficult, (but in my opinion) the most important thing of all. The CEO and the co-founders should at least spend 25% of their time on hiring high-potential new team members. I you bring the wrong new team members on board this will set your company back and might even kill it, especially when there is no cultural fit. What many founders often underestimate is the culture fit, is more important than skills. You can bring people on board that are from a skills-perspective, amazing. But if they don’t fit in with the company culture – that might screw up the entire company. If you don’t get the culture right in an early stage, your company is going to fail. On the other hand if you bring on amazingly skilled new team members with a perfect cultural fit with the company – that is the best feeling in the world. For me it’s even better than signing a “fat contract”.

Hiring slowly and firing quickly is something really important in a startup founders life. Don’t have a fear of firing people. I’ve had to let many people go,  in the last 25 years. In most cases it was a relief for the team member that we let go. People are not dumb, they know it themselves if they are “in the right place” and “fit in” or not. Hiring slowly is really important as well.

“I recently brought on board a CEO for our Dutch operations. Till that time, I myself was the CEO of the company. The business was growing and my goal was to focus on future international expansion. Handing over the Dutch company to a new leader is quite a risk. For the new CEO as well, it was quite a risk to give up a well paid job at a large company. When we first started talking about bringing Peter onboard I agreed with him that we would meet every 2 to 3 weeks for 2 hours to discuss my vision, how we are organized, brainstorm about his role and ambitions, talk about the things we needed to change, discuss how we would work together etc. We did this for 6 months and at a certain moment we both felt that this is going to work. Only then did we start discussing the formal part of Peter’s jump to us.

I had many questions and remarks in the last months regarding whether I could let go and give Peter the space he needed, to change things. And actually it has been very easy so far. Why? Because we were fully aligned from the start and invested serious time in getting to know who we both are, how we think and how we can make each other better. I told Peter you can change everything you want but there is one thing you can not: it’s our culture. It’s what we stand for, it’s the entrepreneurial way of operating, it’s about customer obsession, accepting failure, treating everything we do as a MVP. It’s operating the Startup Way. That’s why our team members stay with us.”

#10 Not appointing a Pre Mediator

Start-ups have specific dynamics and face specific issues relating to things like equity they own, commitment, contribution to the team and company and how to deal with misalignment in team and dynamics. When we launched Startupbootcamp, I introduced the term  “Pre Mediation”. Yes, you go to a mediator when you have a problem that needs to be solved: but what about solving the real problems before they get “real” and big?

Pre-mediation is where you discuss all the things that are in your gut, and not always being discussed between the founders. By regularly participating in pre-mediation sessions, disputes can be prevented as much as possible. At Startupbootcamp we now have a team of dedicated Pre Mediators. We apply the same principle at the corporate startups we launch, for our corporate partners in which “intrapreneurs” operate as the founders. I can tell you this: I expect that we have saved at least 15% of all companies in our portfolio, through this practice. I myself conduct pre mediation sessions with my co founders and business partners.

If you want to learn more about Pre Mediation feel free to reach out to Mr. Pre Mediation: Roelof Vos @ Roelof@Startupbootcamp.org

We’ve covered #1 – #10 of Founder F#ckups! Check out the next edition to this blog series, coming very soon! In the mean time, feel free to browse through the slide deck, highlighting the biggest mistakes startup founders make, here.