The Materialisation of Decentralised Energy in Australia – a Pathway for Startups

The Materialisation of Decentralised Energy in Australia – a Pathway for Startups
November 15, 2017

A significant transition is underway in the Australian electricity market, mitigating away from traditional fossil fuels to renewable energy. This transition has been primarily driven by the global response and commitment to the Paris Climate Agreement, to combat the effects of climate change and limit warming to 2 degrees. Clean technology frameworks and new ways of energy deployment will be the catalyst in achieving this goal. Technological innovations continue to drive adoption, accessibility and economic viability of renewable energy. Due to the uptake of projects, Australia has become the testing ground for startup enterprise seeking to capitalize on the energy transition.

Currently, Australia relies heavily on coal, gas, and oil to serve the high electricity demand. According to the Australian Energy Regulator this high demand continues to rise, meaning supply is constricting and prices are fluctuating, causing concern over energy security. This has arguably prompted policy incentives for consumers to switch from traditional to renewable energy. 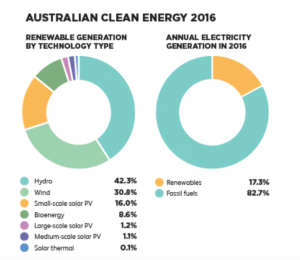 According to the Clean Energy Council, renewables provided 17.3% of electricity generation in 2016 (the diagram opposite reflects the full breakdown by energy source). However, 2017 is set to be a record year for renewable installation and deployment, with more than $5.2 billion worth of investment secured and 35 projects currently underway.

Decentralised Energy Generation (DER) has been a key driver in the adoption of renewables, due to the distinct advantages it offers over traditional energy. Firstly, energy security – producing energy close to where is it consumed means not relying on the grid, which can be a source of failure. Secondly, stable pricing and long-term deployment of decentralized energy can offer more competitive pricing and not fall victim to fluctuations. Finally, in relation to reduced emissions; renewables are clean sources of energy in line with the political ambitions to reduce emissions – the burning of fossil fuels releases toxic greenhouse gases that are not sustainable in the long term.

Australia’s shift to decentralised renewable energy is gathering momentum, thanks to a number of key projects. Genex Power’s 50 megawatts Kidston Solar Project located in North Queensland, is one of twelve developments. Once complete, it will triple the amount of electricity produced in the country and unlock $1 billion of commercial investment in solar technology.

Currently being trialled is Decentralised Energy Exchange (deX), an online marketplace that allows households and businesses with rooftop solar and battery storage systems to earn revenue for excess electricity capacity. The idea is that the network effect will help strengthen the grid and create a competitive marketplace for suppliers and consumers.

In adherence to the Paris Climate Agreement, Australia is taking giant leaps to transition towards a low carbon energy sector. Investment in renewable technology is showing early signs of success and is set for another record year in 2017. Startups continue to feed off the success of renewables, creating new business models and marketplaces that will in turn help speed up the process to a sustainable energy future.