A safer & faster way to send files, without the cloud? 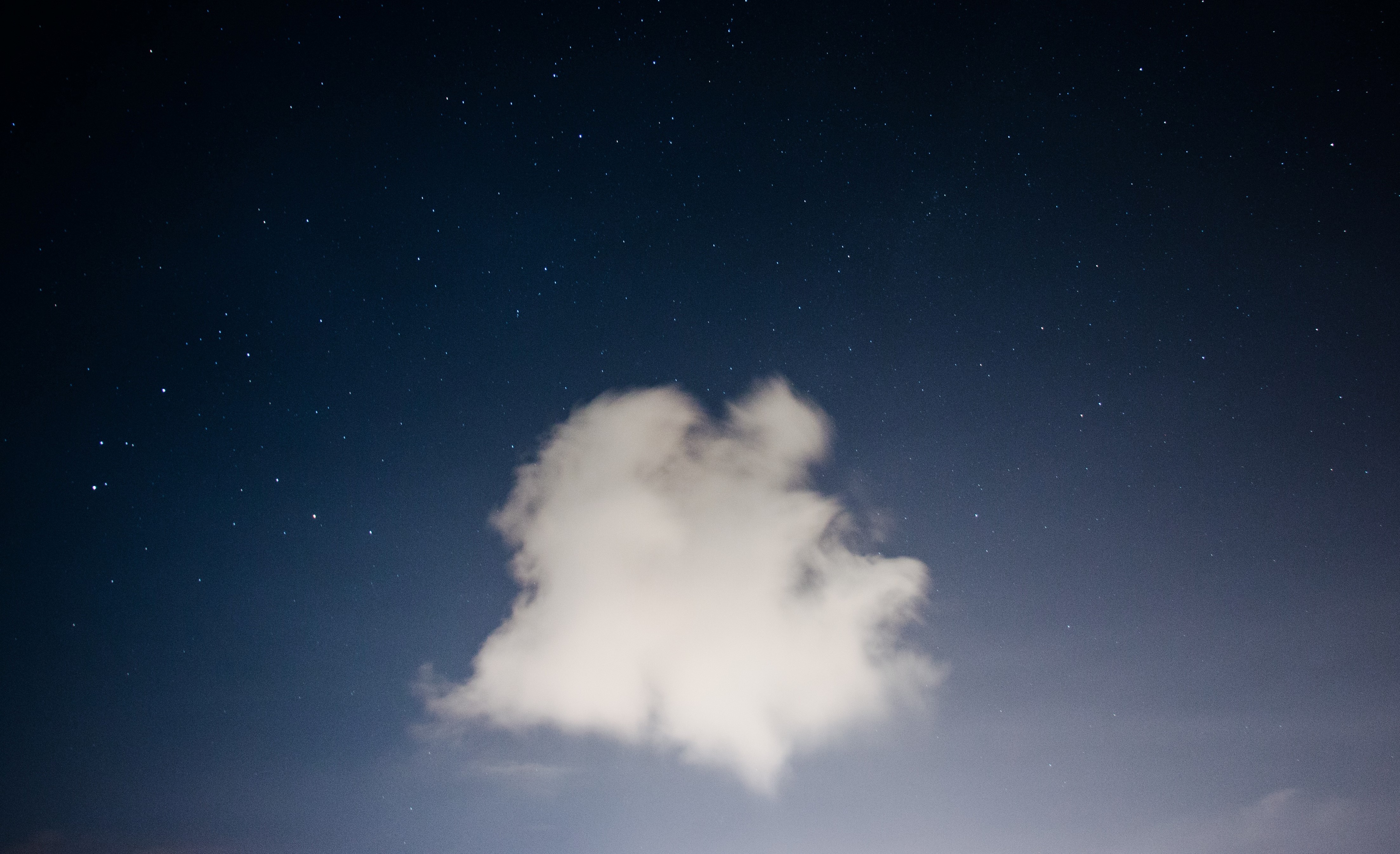 The cloud. Some people are afraid of it. Some people love it. Some don’t even know what it is. One thing that is certain though, today, the majority of our online tools are in the cloud. Many of us have overlooked the radical change from using pre-installed computer programs to cloud based software over the past decade, but it has been one huge advancement. However, now some users want to retain the advantages of the cloud and omit its disadvantages, such as, frequent low speed and uncertainty of privacy in the third party server. So, is there a solution?

Well, let’s go back to the very beginning of cloud computing. We’ve seen a big trend that started bottom up, from freelancers and individual professionals that required tools to be able to work together in a collaborative way, without having to pay for a lot of individual software. As collaboration in the workplace grew, the need for file transferring did as well. This trend is still in full force and has made its way into the SMB and enterprise market, with the ability to reduce costs of IT infrastructure and maintenance, dramatically.

You could say Wetransfer has been the go-to platform for file sharing for a while now,  alongside Google Drive & Dropbox. They had to scratch their own itch after trying to send a large media file to a customer and failing to do so. Email has a file size limit and most customers are not allowed to install software, such as a FTP client, by themselves on their computer. So instead of using a messenger service, they solved their own problem by finding a way to send a file from one browser to another, in other words, uploading through a browser and downloading on the other end.

Wetransfer is a great service for many people and it gained a lot of traction, but it’s not for everybody.

Let’s say you’re a music producer and you need to send an exclusive, never heard before track to a colleague overseas, or you’re a photojournalist with a fresh image from a high profile event and you have to get it to print without any interference. Would  you trust it with the cloud? Probably not. Yet you still have the necessity of sharing large, confidential files to a receiver that could be on the other side of the world.

It’s understandable to be cautious, given that in 2016 Yahoo and Twitter faced security breaches which highlighted that even the most reliable and widely used services are not 100% secure from external attacks.

We spoke to mentor & entrepreneur Pol Hortal about promising startup Takeafile,  to see if they have what it takes to tackle the needs of those with large, confidential files.

“Takeafile identified that the user faces three pains: the whole process (upload and download),which can take a lot of time if you are handling big files, assurance of confidentiality and privacy. And a better user experience…existing solutions tends to be tedious.

“They have achieved to solve those pains, building a solution that is easy, fast [up to 10x faster than any other solution] and hassle free. It is secure because no file is stored in a third party server. It’s a peer-to-peer service” he says.

The startup had to find their own solution, much like Wetransfer, because there are no commercial products using the same protocol for transferring files.

Founder of Takeafile, Hector Montaner, explains more about their service and what different qualities they have that their competitors do not.

“The technology behind other services is radically different. They work the traditional way: you have to upload your file to their servers and, after that, the receiver is able to retrieve that file”, he says.

Takeafile uses a new paradigm: direct transfer between two devices, no cloud. People are not used to this way of transferring files, thus sometimes it takes a bit of effort to understand how to proceed with the platform.

“This is something that we are targeting by improving the user interface, by making it more intuitive and natural” Hector says.

“Takeafile works without servers, the file is sent directly from the sender’s device to the receiver’s. We have a unique approach that allows people to send files of any size, up to 10 times faster than Wetransfer, and content is never compromised as it is not stored anywhere.”

At the moment their market is focused within small and medium sized companies,  so is their service suitable for the everyday online user?

Pol thinks “they can provide a lot of benefit to SMB’s, and in doing that, they could learn a lot in order to tune Takeafile and make it 100% suitable for the everyday online user.”

Sending files is a common task for the majority of us but at the moment, Takeafile are focusing on small and medium enterprises that can use their product at a high frequency. For example, marketing agencies, design studios, architecture firms, etc. Or even music producers or photojournalists!

“Our approach to the task of transferring tasks is disrupting, so we think we have a good chance to offer this new technology to these collectives” Hector says confidently.

It’s not just Pol or Hector blowing their trumpet, Takeafile were positively reviewed by lifehacker in July last year and more than 30,000 people have tried the platform so far. 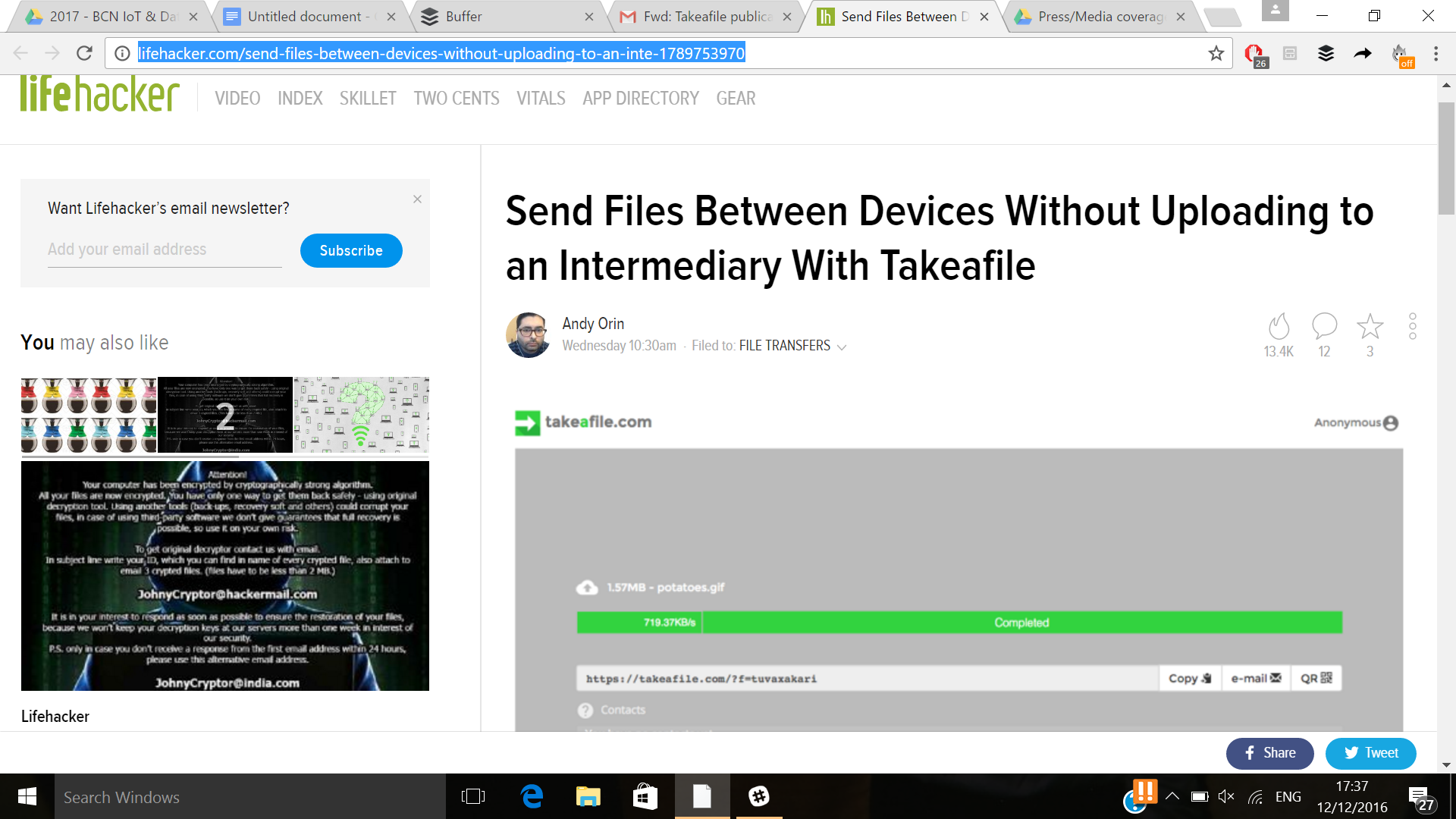 Hector says, “According to the feedback by our users, we are solving an existing problem, and the validation of this is a very important achievement.”

The first wave of cloud computing was created by our global sponsor Amazon Web Services, which launched with a few simple compute and storage services in 2006. A decade later, AWS is operating at a run rate of $11 billion.