The Emergence of an InsurTech Ecosystem in Asia

The Emergence of an InsurTech Ecosystem in Asia
May 12, 2016 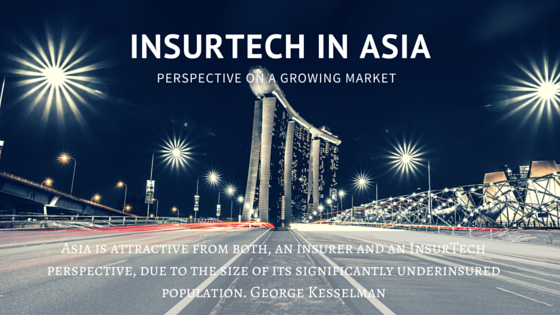 The Emergence of an InsurTech Ecosystem in Asia

Building on TJ Geelen’s blog post about the thriving FinTech Ecosystems in Asia, I’d like to share with you some insights relating to the emerging InsurTech (Insurance Technology Innovation) Ecosystem in the region. Although InsurTech in Asia is in its infancy, since 2015 we’ve seen a surge of interest in the sector. By the way, I’m a big believer that Asia has a real potential to power the next wave of global insurance innovation.

First, let’s revisit the definition of InsurTech to make sure we are all on the same page. Similar to FinTech there is a multitude of areas in insurance that technology can enhance or disrupt. Essentially, there will be three major camps of InsurTech: one that enhances existing insurance structures, another one that aims to disrupt by providing alternative digital risk transfer mechanisms, and the third type coming from existing insurance firms attempting to defend their existing market positions. The first and third types broadly can be broken into the following sub-types, while the second type attempts to drive an end-to-end structural innovation, either removing part of the structure or fully digitizing it.
– Product Sales / Distribution (Aggregators, Online portals, Apps)
– Risk management (IoT, HealthTech, Blockchain)
– Fraud detection / prevention (Big data, Machine learning)
– Claims management (Big data, Machine learning, Vendor Network Management Solutions)
– Service management (Chat Bots)
– Investment management (Portfolio optimization, Asset liability matching)

Why Asia for InsurTech

Asia is attractive from both, an insurer and an InsurTech perspectivedue to the size of its significantly underinsured population. The region has traditionally seen a large part of the risks self-insured through family and community networks. As the region experiences rapid growth in the affluence of its population, together with an aging population, the risk exposure is then becoming even more apparent and the need for alternative risk transfer mechanisms, including insurance, increase. InsurTech, alongside traditional insurance, can provide or enhance risk transfer need in the region.
Further, strengthening the case of InsurTech in Asia, there is the clear presence of a near-perfect locations for the launch of a program. Singapore is one of these, which allows for sandboxed experimentation, regulatory support and advanced tech infrastructure. From the demand side, limitations of traditional insurance distribution channels and the rapip increase of 4G mobile penetration means that insurers are also highly interested in exploring innovative partnerships that help them connect with potential customers.

Asia is a very diverse region and has a mix of developed and emerging countries. It is worth noting the locations in Asia that have the greatest potential to drive a prolific InsurTech ecosystem. So far the major push for InsurTech has come from China, India, andSingapore, while Japan, Korea, and emerging Vietnam, Cambodia, Taiwan, Philippines, Thailand, Indonesia, Malaysia, and Burma have so far have lagged on the InsurTech front and startups in general.

It’s worth noting that while Australia and New Zealand are both geographically close and are very well integrated in the Asian region, the characteristics of the market are much more ”Westernized” and hence are less applicable to this blog post.

There’s China and then there’s everyone else when it comes to InsurTech. First, full stack (end-to-end) innovator Zhong An valued at a massive $8b and which raised $931m, accounts for more than a third of the global InsurTech funding in 2015. It is also worth mentioning TongJuBao (peer to peer) insurer and FWD (Asia’s second-richest family’s insurance venture that is re-positioning itself from traditional insurer to an agile digital insurance competitor).

India is another vibrant Asian insurance market that has seen its InsurTech innovation focus mostly on distribution. Not surprisingly, two of the major aggregators come from India: Policy Bazaar andCoverFox have seen healthy level of customer take-up as well as sources of funding. Interestingly and logically so, CoverFox has recently expanded its service proposition, now assisting customers with their insurance claims.

Being based in Singapore, I have a particularly detailed view of the InsurTech landscape in Southeast Asia. So far I have gathered the following mapping of Asia InsurTech startups as they fit within the insurance value stack. There’s a mix of very early stage as well as more mature Series A and listed ventures. The list keeps growing as I discover new startups that are targeting InsurTech space in Asia.

Please feel free to comment and reach out if you come across any additional startups that I’ve missed out in the list below, and I’ll update it.

In summary, Asia is a region to watch when it comes to InsurTech. Whether it being the home-grown insurance innovation from China and India, corporate innovation from Singapore or innovation concepts imported from elsewhere and deployed in Asia, the region is likely to deliver a vibrant InsurTech ecosystem during the course of the next two to three years. And when the dust and excitement settles down five years down the road, we’ll have a fundamentally stronger set of competitors.

Wanting to accelerate insurance innovation in Asia, we’ve created InsurtechAsia, an action-oriented community of insurance practitioners, entrepreneurs and industry stakeholders across Asia. We are aiming to attract the best minds to tackle the challenges and opportunities in insurance, connect entrepreneurs with the best enablers, validate concepts, and help business scale rapidly.

Lastly, a dedicated and company agnostic InsurTech accelerator, such as Startupbootcamp InsurTech, which was launched in London late 2015, would go a long way to spur further insurance innovation here in Asia. We’ve been closely following the progress of the startups on the program, and were happy to send in our heartfelt congratulations to the recently graduated cohort of startups. Meanwhile we are eagerly awaiting the day when Startupbootcamp InsurTech will come to Singapore with their program.

About InsurTechAsia: InsurTechAsia is a community of insurance practitioners, entrepreneurs and industry stakeholders across Asia. InsurTechAsia is building a strong insurance innovation ecosystem in Asia for entrepreneurs and industry stakeholders by creating opportunities where the right mindsets, skillsets, and networks will develop. Are you passionate about making a change to the insurance industry? If so, join us at www.insurtechasia.com and follow this great team of like minded people on twitter @insurtechasia